Honey flow in Oklahoma is about mid-late April through the last of June. And that’s when the real work of beekeeping happens. The lack of consistent rain and the heat of summer causes the nectar of most flowers to dry up – preventing the bees from foraging what they need to make honey. 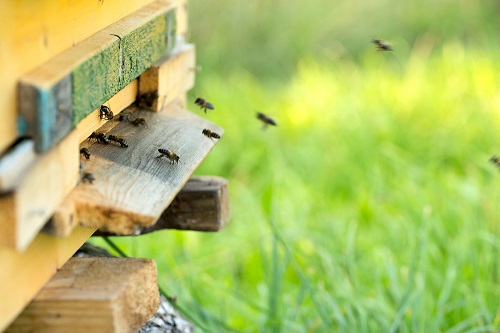 The first of April is the time for splitting hives; however, if a person is buying a hive or two for the first time this process is unnecessary.

Splitting involves breaking down a hive frame by frame and categorizing each frame as: brood, honey, pollen or simply drawn comb. Building back a box involves placing two maybe three brood frames in the center of the bottom box, then shaking all the bees into the frames of the bottom box. Then, on both sides of these brood frames placing a honey frame on one side and a pollen frame on the other. Then filling out the box with drawn or foundation frames, and lastly placing a feeder at the outside edge of the box. At this point place a queen excluder on top of this bottom box to “trap” the queen here. Then place another empty box on top of this bottom box and start the procedure again. However, at this point there is no need to shake the frames into this box because the queen is now located in the bottom box. One should have enough brood frames to make two maybe three splits per hive. Thus, where one colony was now there are two, again, maybe three colonies. On average there are 7.2 frames of brood in a good healthy colony. So, maybe give the old queen 3 frames of brood on the bottom and the next box 4 frames.

The next step is to sit the hives down, or removing the upper queenless colonies to a location that is at least 2 1/2 miles away to prevent drift back to the old queen colony. Then, one should wait 24 to 48 hours to introduce a queen that is in a cage into the hive. Wait 5 days and if she has not been released naturally into the hive then release her. Don’t move or disturb that new colony for 30 days, or the chance of the colony balling or killing the queen is very high.

Yes, the process of splitting a hive is involved but once the overall concepts are understood, your understanding of the behavior and biology of a bee colony is greatly increased.

It maybe best to buy a hive already “queen right” the first year and try to master keeping the hive healthy and productive the first season.